Today it’s a vibrant laneway that has been repurposed as part of the $2bn Central Park redevelopment of the old Kent Brewery site.

Tooth and Co operated from this site from 1835, establishing a “city within a city”, encompassing hotels, warehousing, administration and workers’ housing as well as a massive brewery. The entire site, covering a city block of 6.4 ha, was acquired by Fraser Property Australia. An array of renowned Australian and international architects – Foster + Partners, Jean Nouvel, Tonkin Zuleika Greer, Tzannes Associates, and Johnson Pilton Walker – was commissioned to work on the many projects involved.

The Danish-Australian joint venture of Jeppe Aagaard Andersen and Turf Design Studio (JAA+TDS) was charged with creating an identity for the public domain areas of the Central Park project. They chose Bowral Bricks Hamlet Blue premium-quality clay pavers to create a “floor” in Kensington Street. The paver patterns and single colour unify and link the street’s many, and sometimes disparate, elements while respecting its heritage. Sydney has long been envious of Melbourne’s vibrant labyrinth of laneways but struggled to find its own unique solution. “Sydney is trying very much to breathe new life into its laneways and Melbourne has been an exemplar,” admits Mike Horne, the project leader for JAA+TDS, who describes the new Kensington Street as “Sydney meets Singapore meets London meets Melbourne.”

At the head of Kensington Street is the Old Clare Hotel, a former brewery house that has been merged with the adjoining former brewery administration buildings to create a 65- room boutique hotel with three upscale restaurants. Further down the western side of the street is a new student housing highrise, servicing the nearby universities. The eastern side of Kensington Street is lined with terrace houses, some dating back to 1835, making them among Sydney’s oldest. The repurposing of these buildings as restaurants and gallery spaces was the key to turning this once-neglected street into an energetic inner-city laneway. “The terraces come down in scale from the hotel and warehouses opposite and really speak of old Sydney,” Horne says. 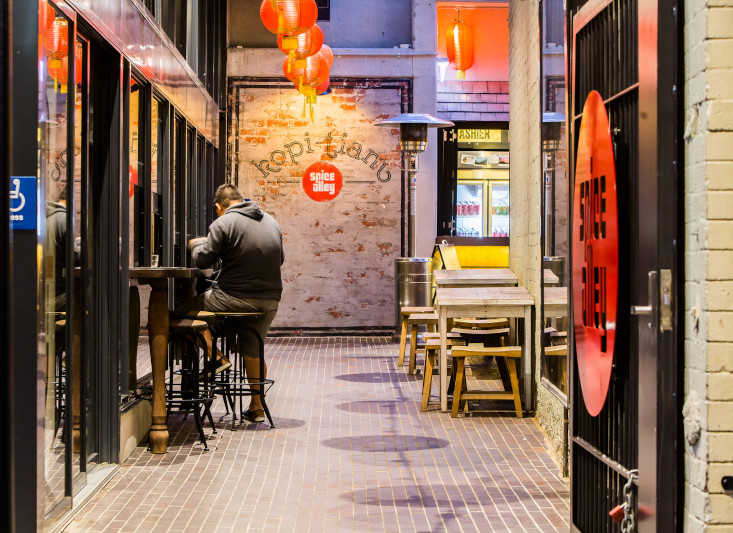 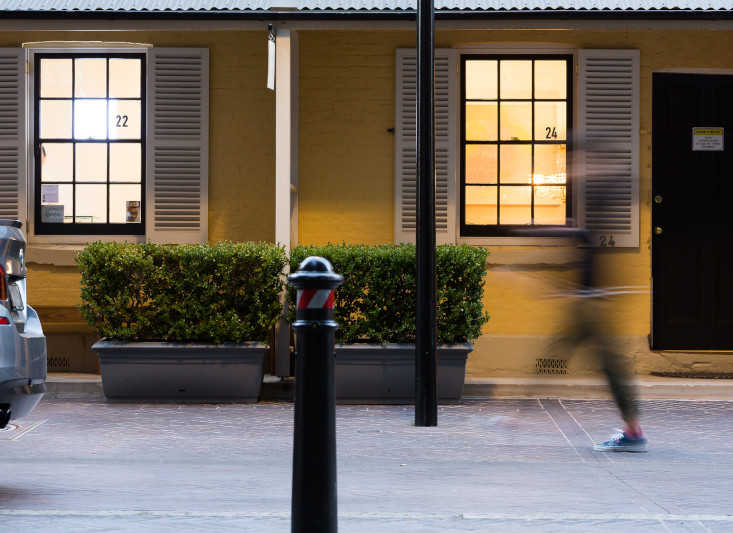 The redevelopment of Kensington Street was driven by the vision of Dr Stanley Quek, head of Greencliff, the co-developer of this aspect of the Central Park project. In what Mike Horne calls Dr Quek’s “stroke of genius”, he made the decision to link the back yards of the terraces and create what has since been named Spice Alley, with a number of vendors serving street food. This very Singaporean approach matches the strong student demographic of the area and provides a low-budget alternative to the restaurants opposite.

Mike Horne and his team had previously used Bowral Bricks Hamlet Blue pavers as edging to a pathway that cleaves the Central Park site, linking Chippendale Green to Broadway, a throughway that had been denied to the public for 170 years. The simple linearity of this path was appropriate to this application but the challenge for Horne and his team was how to approach the very different (and eclectic) requirements of Kensington Street.

“There’s lots of things going on and how best to react to that is the key,” he continues. “Using just use one material in a really simple and elegant way by creating a floor to the whole of the project.”

Clay pavers were the logical choice as the material to connect and strengthen the heritage qualities of the street. “There’s brick in the buildings, so we continued that on the floor through the market, through Kensington Street itself, through all the little micro lane connections between some of the terraces, even into the lobby of the Old Clare Hotel.”

The pavers chosen for the Chippendale Green pathway edging and in Kensington Street were Bowral Bricks Hamlet Blue, a colour made specifically for this project. “We’ve taken the palette used in the Green and, in a sense, turned up the volume in Kensington Street,” Horne says wryly.

The new paving, which encompasses the pedestrian and vehicle areas, is laid over a series of concrete slabs. The pavers are laid on edge giving a face area of 65 mm by 230 mm and a depth of 76 mm. They are bedded in a stiff slurry screed, with a wetter slurry broomed into the narrow, five millimetre joints. 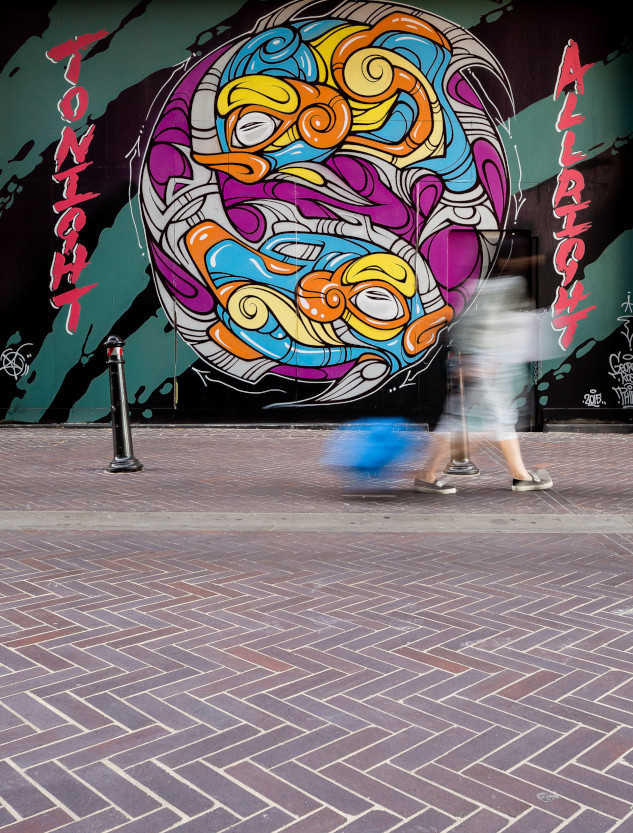 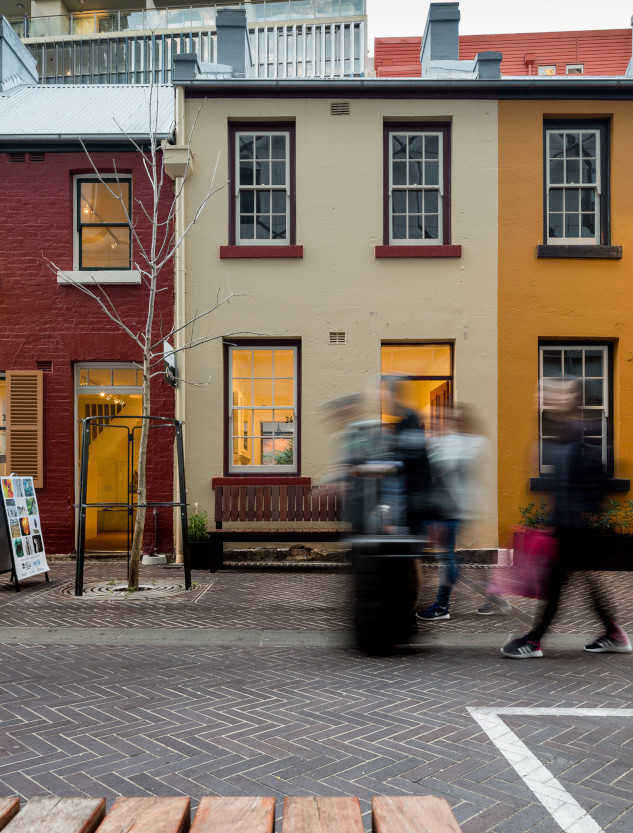 “Because you have a smaller face, that means more bricks have to be laid and there’s a labour cost in that,” Horne admits. “However, I think everyone on the project agrees that the return in quality was well worth the extra cost.”

The dominant paving pattern is 45 degree herringbone, a bond that is time-proven as the strongest in vehicular applications as all the paver lines are at an angle to the direction of wheeled traffic. However the JAA+TDS team did not choose this pattern for that reason.

“In Chippendale Green it was all about accentuating the line,” says Horne. “In Kensington Street we used a herringbone pattern at 45 degrees to the line of movement to de- emphasise the line. The buildings were creating the line and we wanted, in a sense, to send the line off to the edges to the activity.”

The paving contains what Horne calls “sub-patterns.” Bands of stretcher bond traverse the street at a number of locations to subtly direct pedestrians to connections into the terraces and Spice Alley. The stretcher pattern is at 90 degrees to vehicle traffic, reducing its movement potential.

“It’s the idea of creating this sense of continuity and connection and then letting each individual retail offering exert its influence over the top of that,” says Horne. “These indoor-outdoor connections are really incredibly important because they are all part of the same experience,” he expands. “It’s a continuum. It starts at the outside and completely transitions into something new.”

Horne describes the overall effect of the paving as “informal and unassuming. There’s really just a floor of bricks, a line of lights, and two lines of trees, intermittently placed. It’s not an avenue or a boulevard, it’s just a kind of scattering of elements that respond to the circumstances of the street.”

He goes in to praise the richness and colour of the pavers. “These are beautiful pavers. We wanted this dark blue-brown plane to contrast with the mainly heritage red bricks.”

Surprisingly, this was Horne’s first large-scale foray into clay pavers. So how was his first time? “It was good,” Mike Horne says laughing. “She turned out to be a very fine lady of the street.”

It must have been a good experience because since commencing this project his team has completed several others with pavers including Quarry Green in Ultimo (Bowral Bricks Hamlet Sepia pavers) and Sydney Park in St Peters (salvaged bricks), the latter being a former Austral Bricks site. 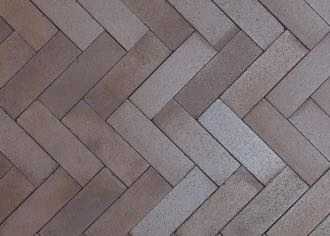 Pavers
Austral Bricks Pavers – Hamlet in Blue
Learn more +
Share
Like the article
Get In Touch
Build your dream home.
Learn about our products.
Discover them today 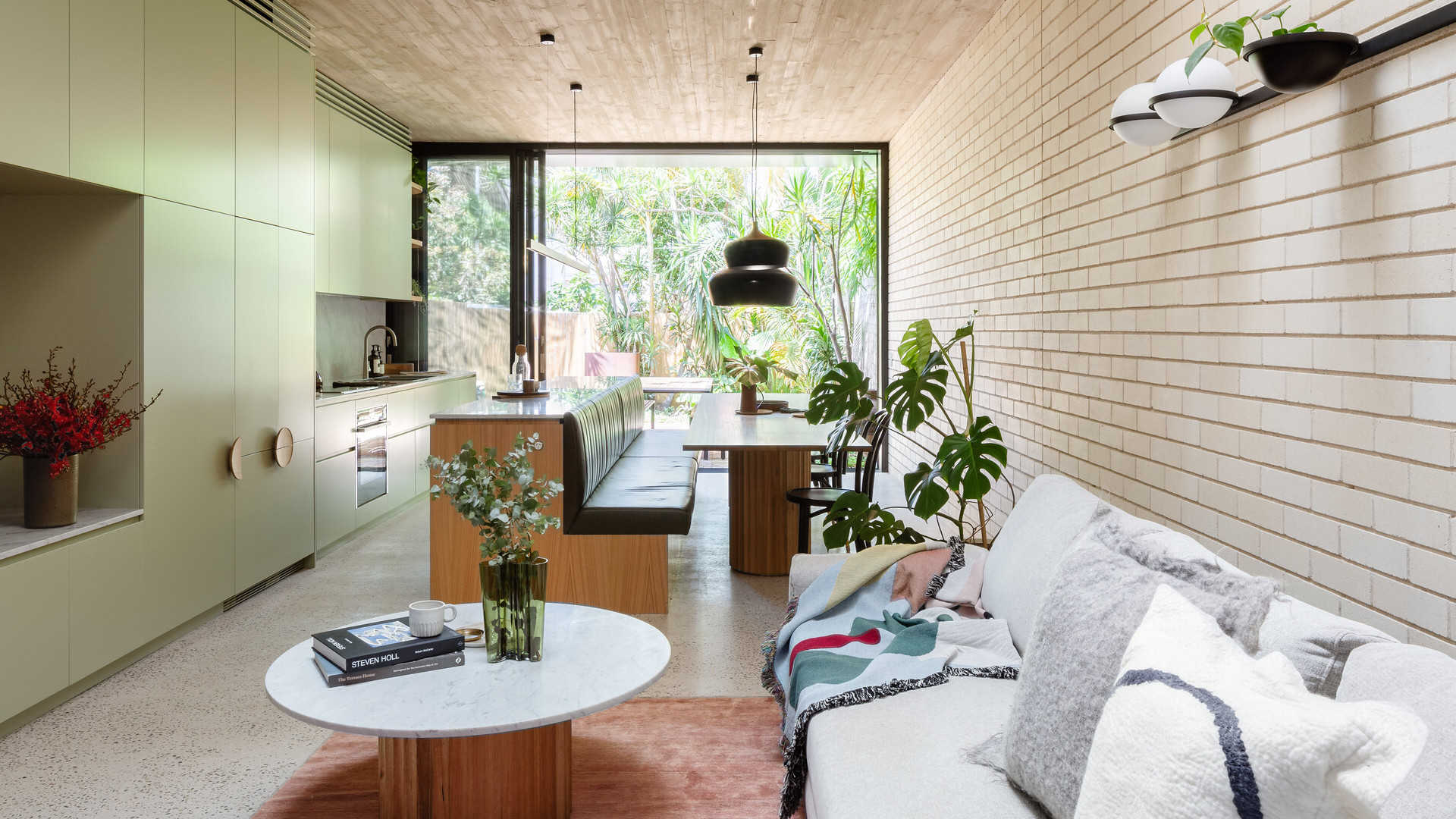 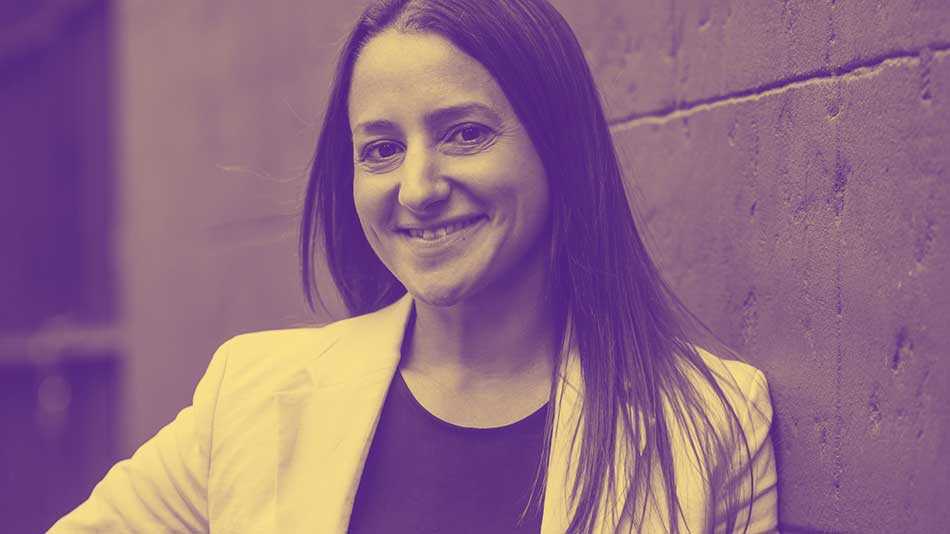 EP.03 Eva-Marie Prineas, Studio Prineas
In their chat, Eva-Marie discusses the way architecture has shifted from being centred around a numerical real estate value, to now focussing on creating spaces that are functional, authentic and full of personality. 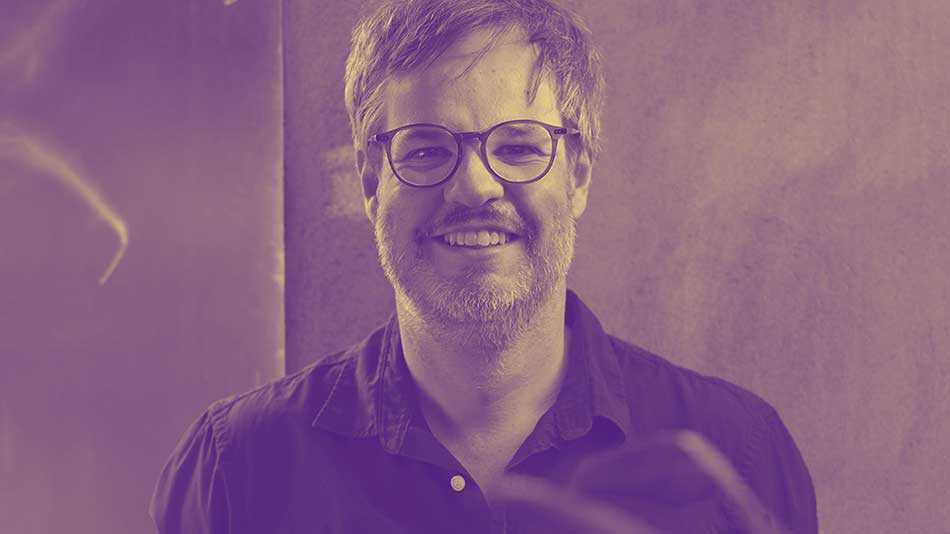 EP.02 John Ellway, John Ellway Architect
Renowned for the seamless integration of nature within his work, John talks through the growing trend of fusing indoor and outdoor spaces, and the impact that the outdoors has on our general wellbeing. 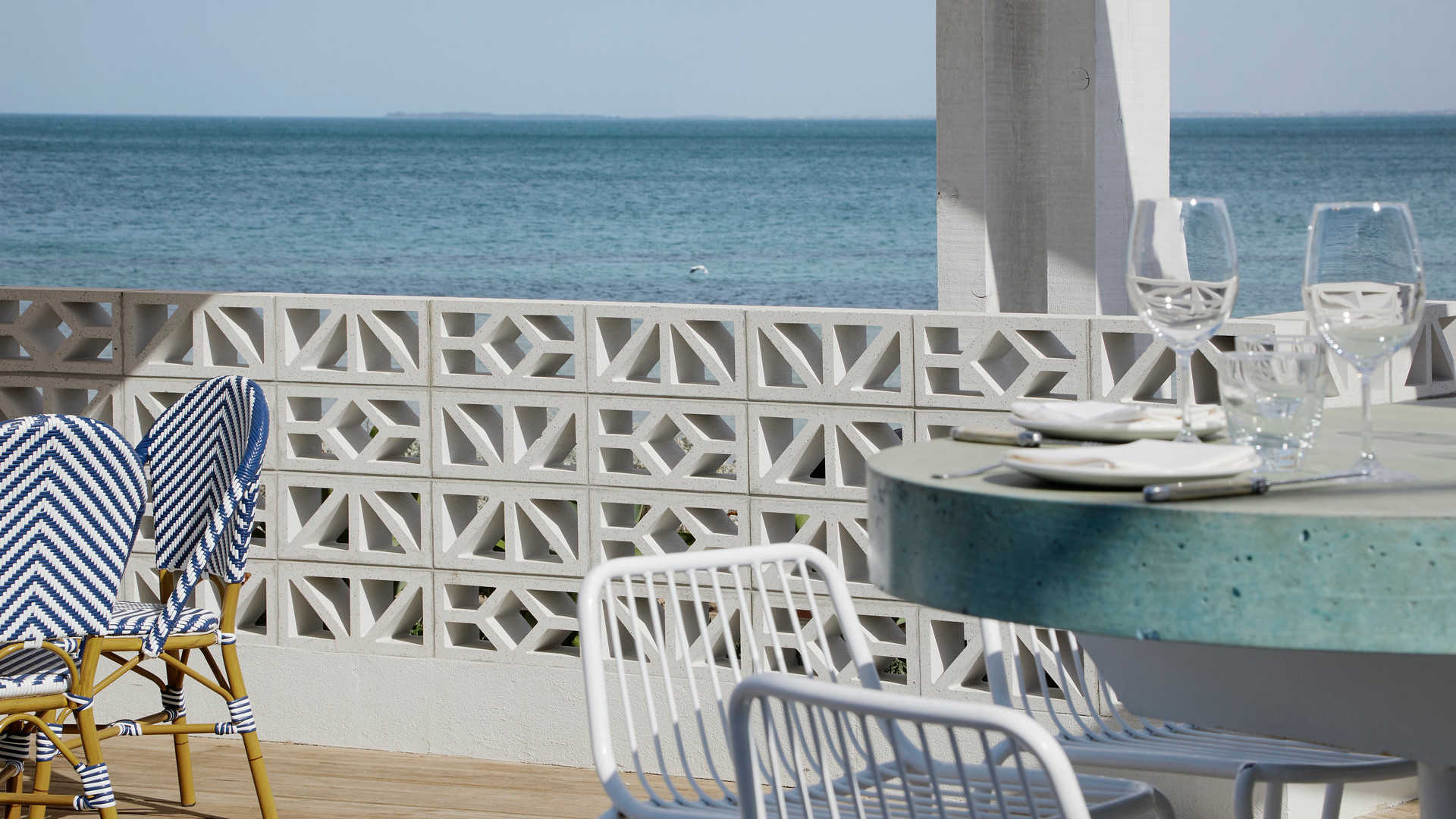 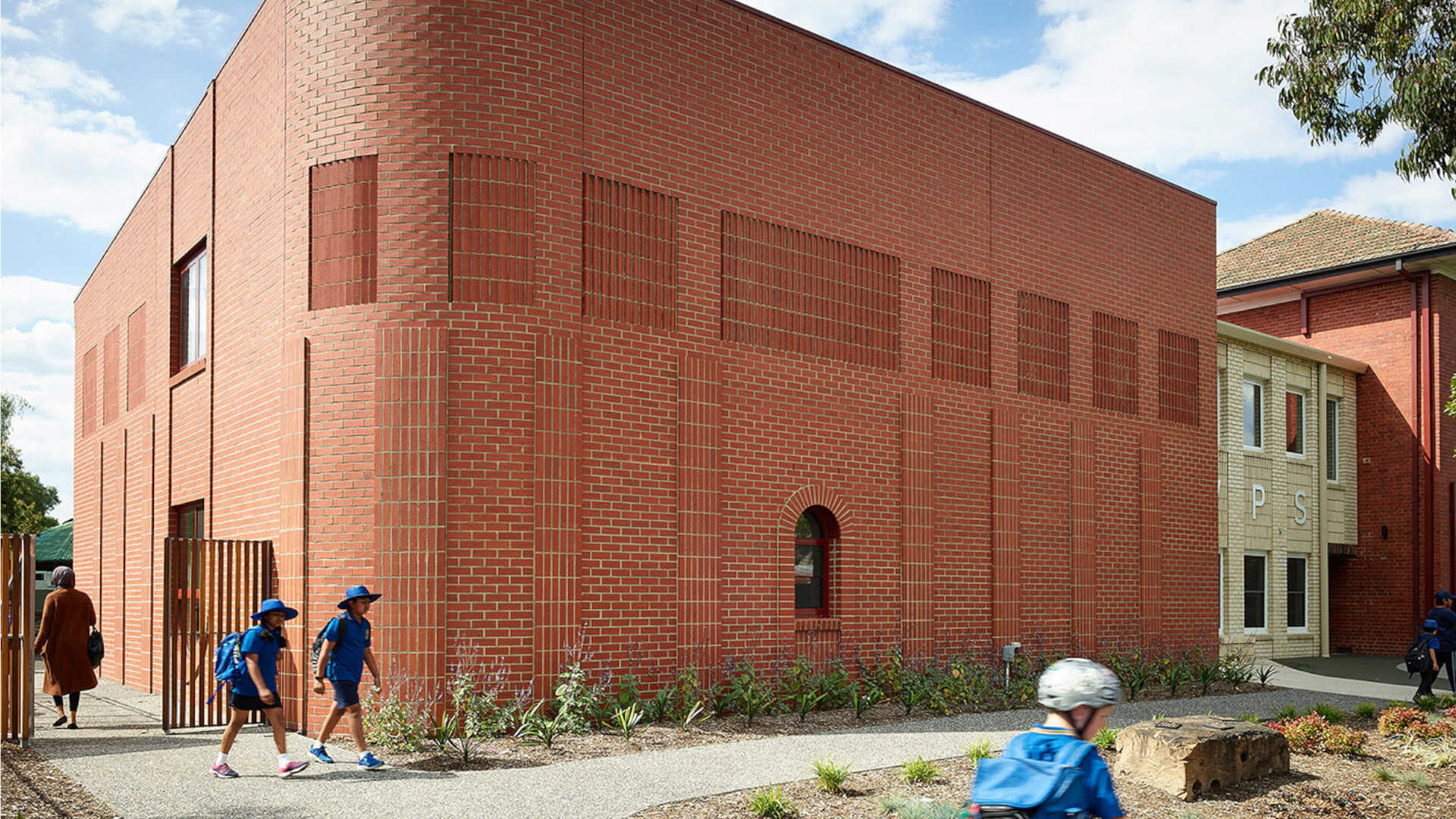 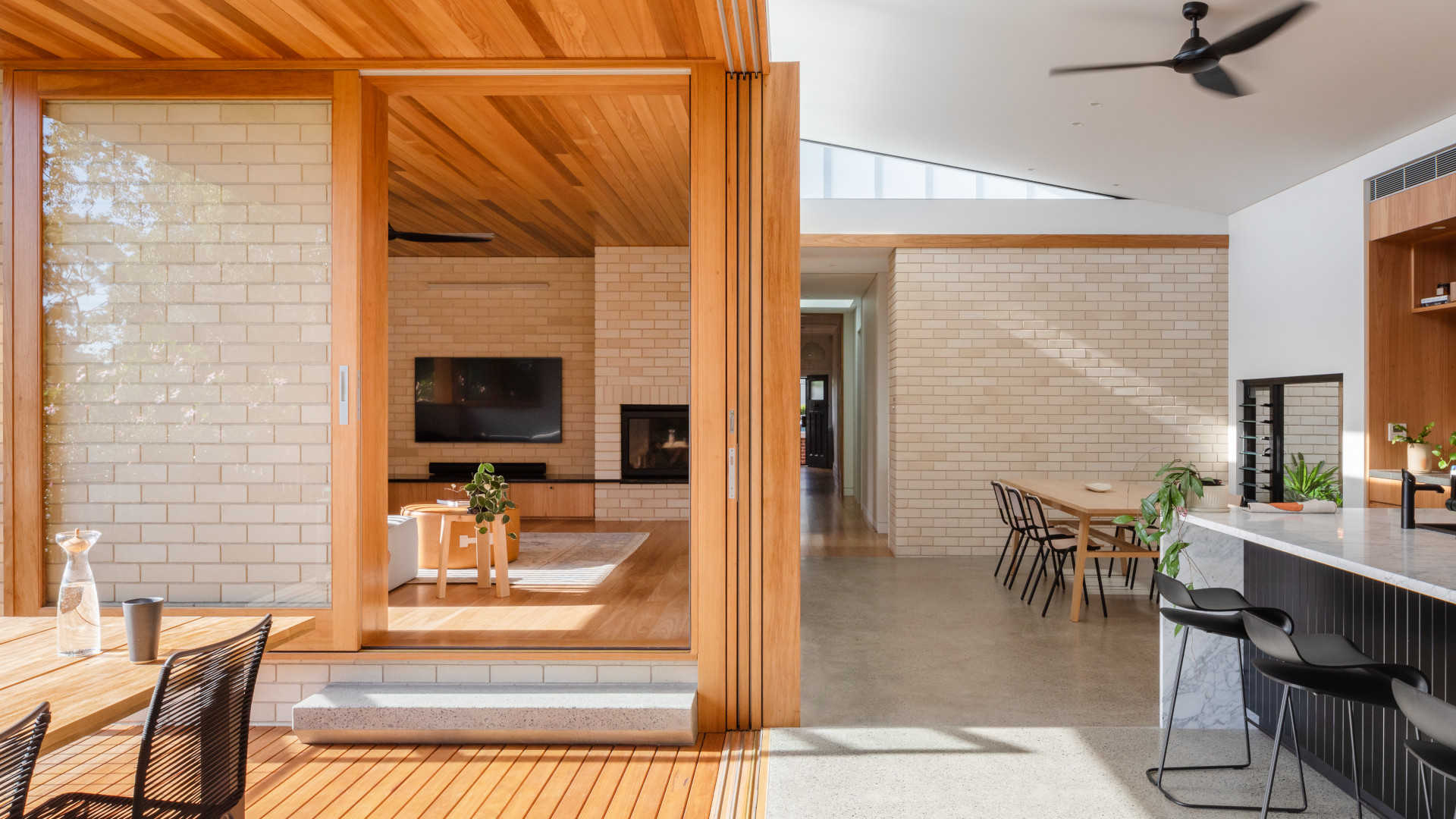 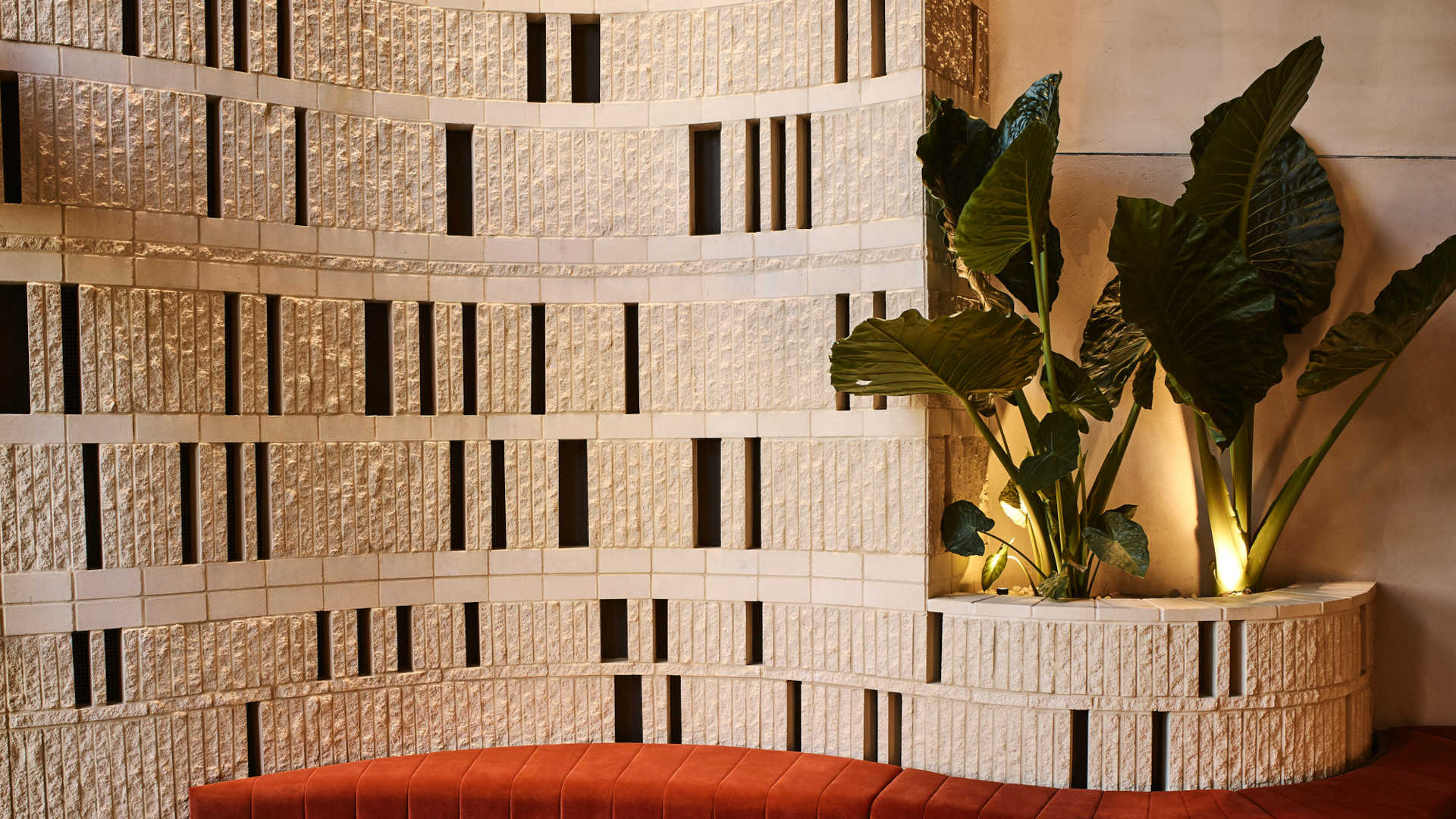 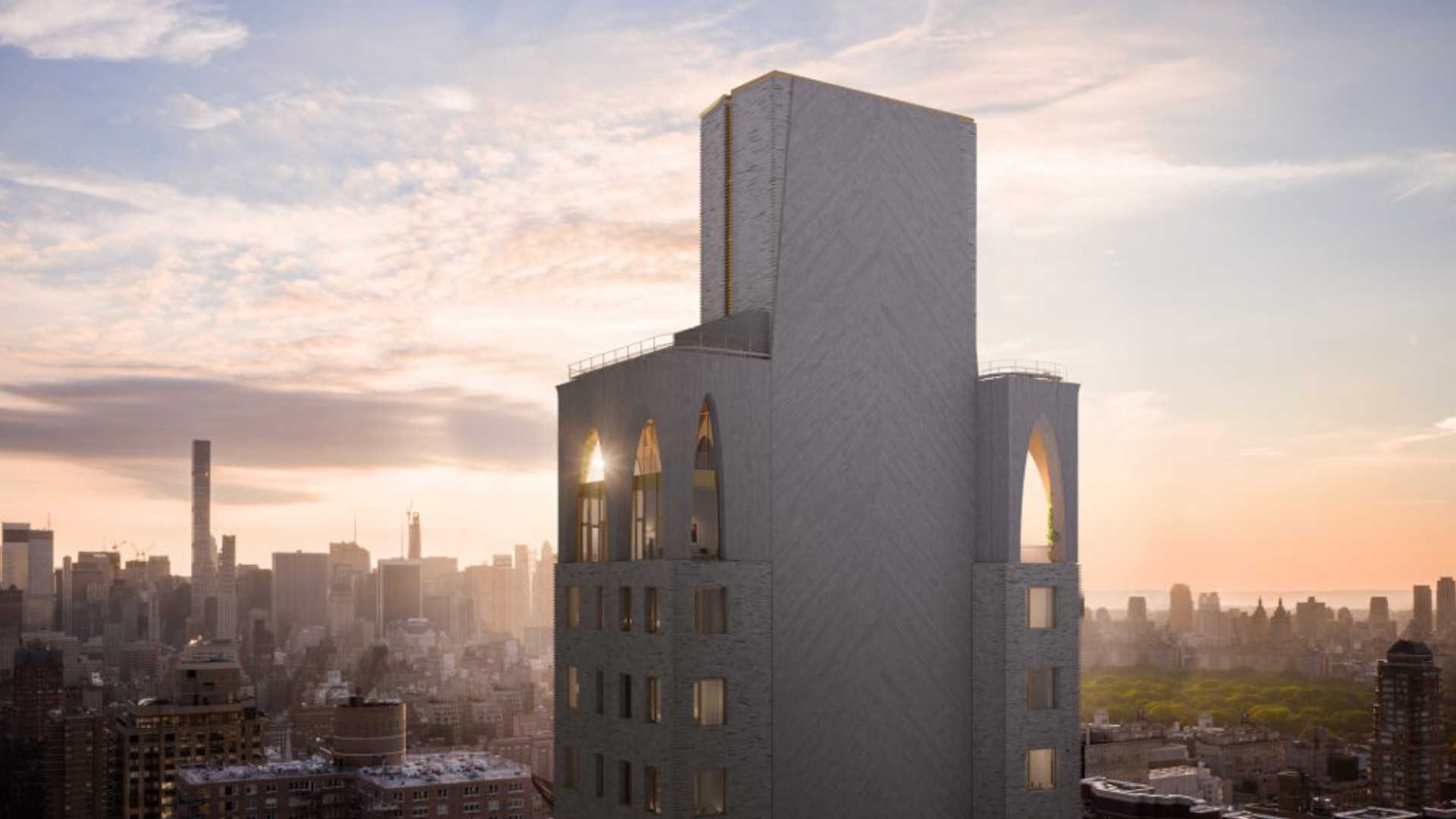 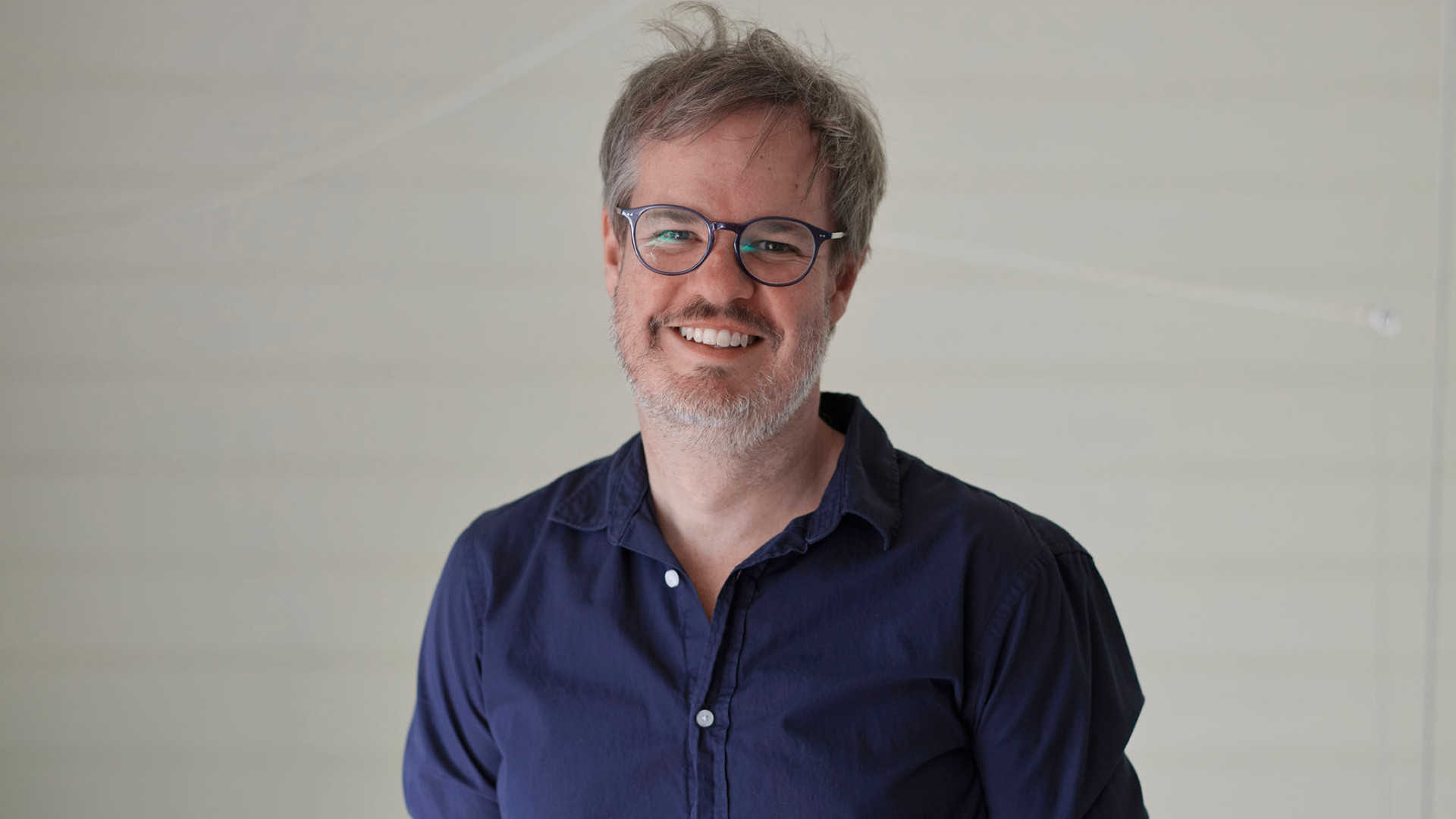 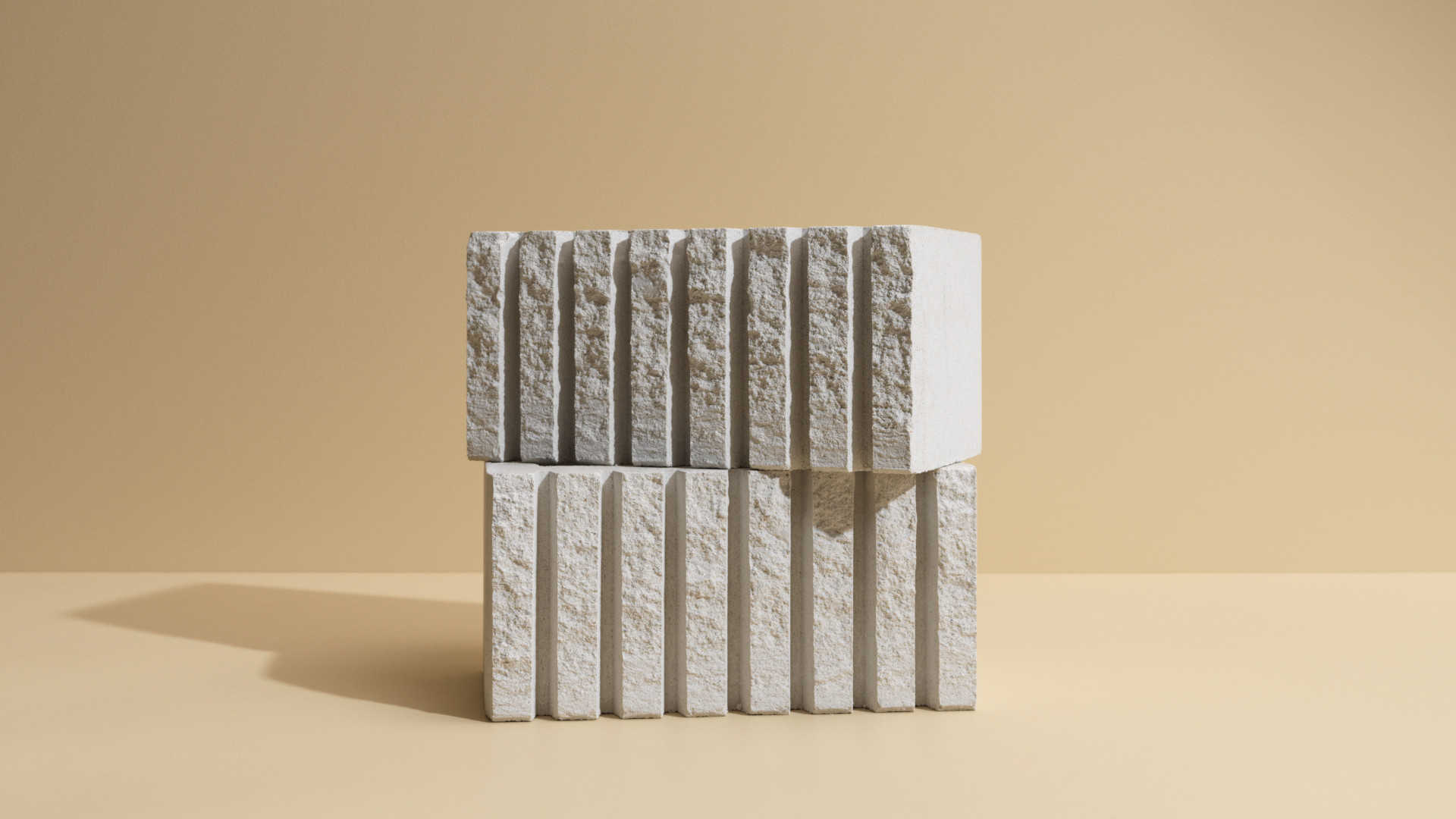