Concrete masonry blocks offer a range of practical benefits that make them ideally suited to a wide variety of commercial projects. They’re also stylish, with a distinctive modern look that commercial clients love.

As the following three projects demonstrate, masonry blocks are an ideal solution for builders who are concerned with both quality and aesthetics. Here are three examples of this versatile material in action:

This elegant office building in the Melbourne CBD has been renovated several times over the past 100 years, but the most recent upgrade by Bates Smart was its most extensive yet. Notably, Bates Smart transformed the central atrium from a cold and clinical thoroughfare to a warm and inviting lounge area and meeting place that serves as the new heart of the building.

The feature wall is a great example of how masonry blocks can be used to create visual excitement in a large public space. 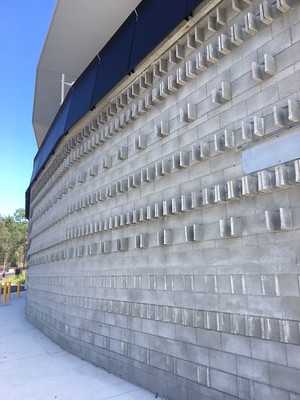 This development in inner-city Brisbane is part of the transformation of historic Newstead from a semi-industrial and wool-store area to an upmarket residential precinct.

It features an immense, permeable screen along the façade that allows the living spaces to engage with the street while maintaining privacy. Although the screen was originally designed to reference the brickwork of historic buildings in the area, the architect, bureau^proberts, eventually decided to use masonry blocks.

“It evolved that the [masonry] block was probably the best unit to work with,” says Liam Proberts, the practice’s managing director. “We could reinforce the block while maintaining the permeability and tie it back to a steel frame in a much more robust manner.”

The firm chose honed, cream-coloured blocks which reflect the light and dazzle passers-by. 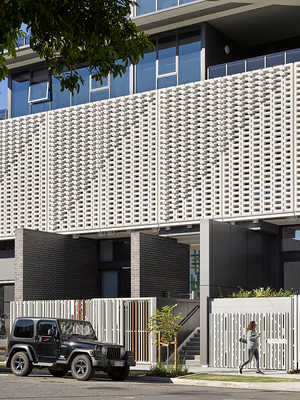 This velodrome was constructed ahead of the Commonwealth Games on the Gold Coast and today stands tall as one of the most elegant sporting facilities in Queensland.

The southern exterior wall features exposed masonry blocks that help tell the story of the building. Some of the blocks protrude, creating an overall resemblance to the cogs on the wheels of a bike.

Explains architect Richard Coulson: “We worked with Austral Masonry to use blocks in a simple way in some parts – stacking them up – but then we’ve cut them in half, rotated them, put them back into the wall.”

He says masonry’s flexibility allowed his team to create a visually arresting feature wall that took advantage of its location. “We’ve got this strong Queensland light, and a lot of the building is about responding to that light,” he says. 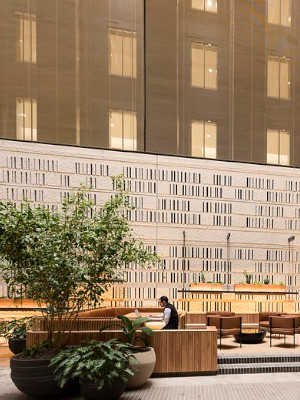 “In the early morning and late afternoon, the sun really comes across the blocks and it creates a great shadow. It’s a great exposed façade for us”

“In the early morning and late afternoon, the sun really comes across the blocks and it creates a great shadow. It’s a great exposed façade for us”