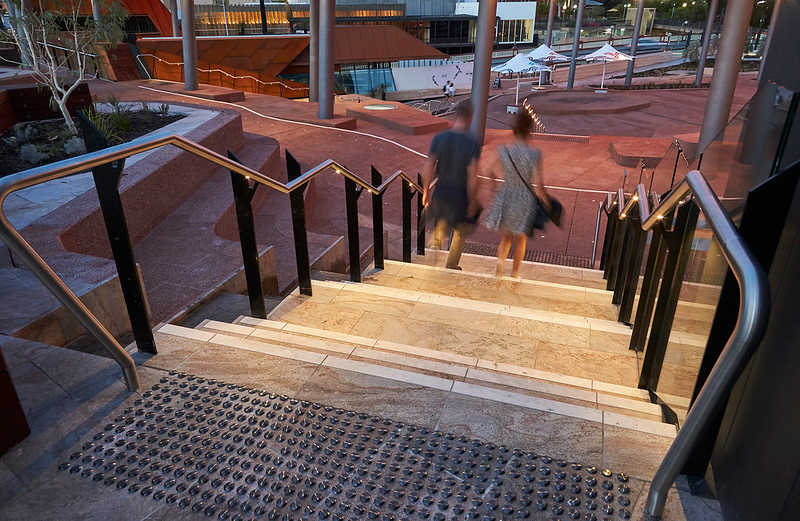 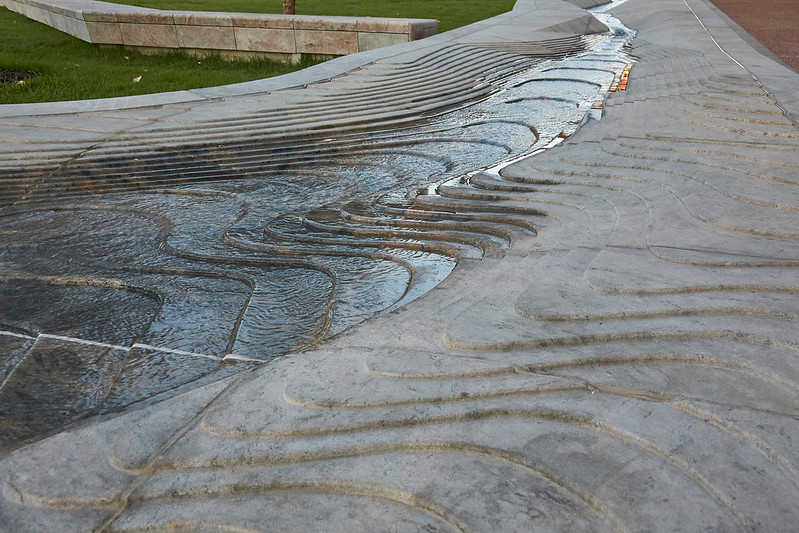 At the heart of the complex is a public amphitheatre, termed ‘The Meeting Place’, where performances and events will be held. Covering the amphitheatre is a perforated steel canopy studded with lights which, along with the decorative Digital Tower in the south-western corner, can be activated to turn into a digital art installation. Native gardens and a series of water features by Western Australian artist Jon Tarry return greenery and shade to the area, while also providing a much needed air filter given the proximity to a road.

The water features are paved with local, carved natural stone. Urbanstone quarried in excess of 800 tonnes of Austral Juperana to form six connecting water features. The variegated colours can only be found in Western Australia, and each of the 1000 stone pieces were hand carved. Intended to be both long-lasting and ephemeral, the stone will be worn down by the water over time. Small details make Yagan Square unique and quintessentially Western Australian.

“The meandering shape of the square’s canopy takes its form from the lakes that were in the area before urbanisation.”

“The meandering shape of the square’s canopy takes its form from the lakes that were in the area before urbanisation.”

Each of the square’s elements is conceived in reference to the history of the area, starting with its name, which gives recognition to a significant Noongar leader named Yagan: a warrior and mediator between Aboriginal people and colonists when they first arrived in the south-west of Australia.

The meandering shape of the square’s canopy takes its form from the lakes that were in the area before urbanisation. In addition, the Digital Tower is constructed to look like the reeds found around the lakes. Fourteen reeds in total represent the fourteen Noongar language groups indigenous to the area. Meanwhile the garden is composed of native wildflowers and local tree species.

The MRA emphasises that this is the first civic space in Australia to recognise an Aboriginal person. A working relationship with the Whadjuk Traditional Owners of the Perth area informed the design of the square and resulted in ongoing art and history projects. For the Eastern entrance on William Street, Noongar artist Lance Chadd has created a 9m statue, Wirin, which speaks of the sacred and creative power that connects all life. It is rare to find a city square so nuanced with the layers of history on which it stands. 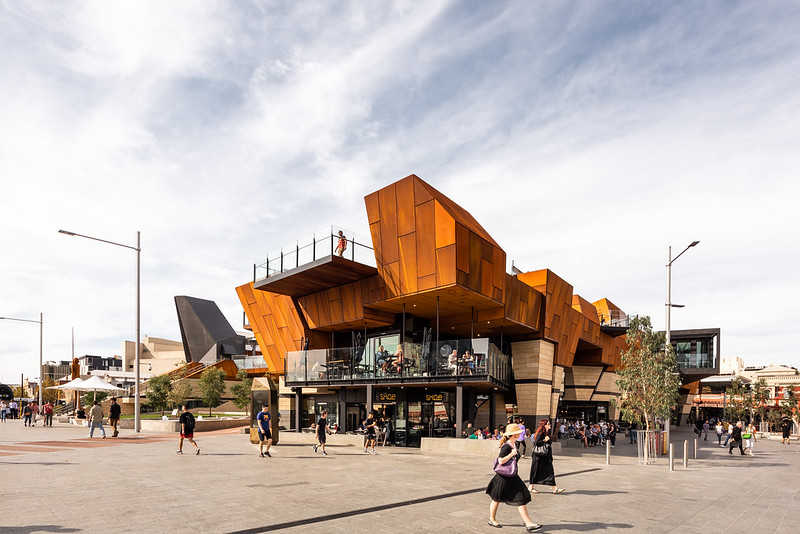 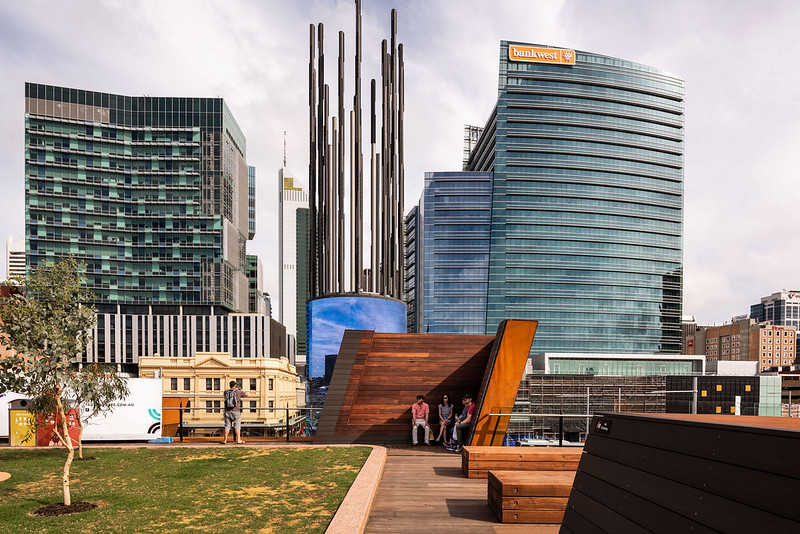 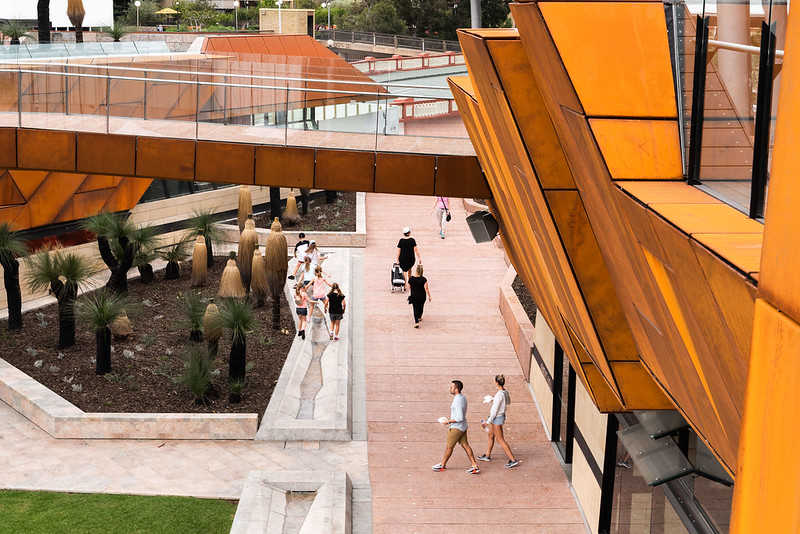 Yagan Square presents an exemplary case study in the successful collaboration between different knowledge groups and skill sets – only achievable through a recognition that multiple groups have authority over this public space, and each must be allowed their meaningful and positive input. 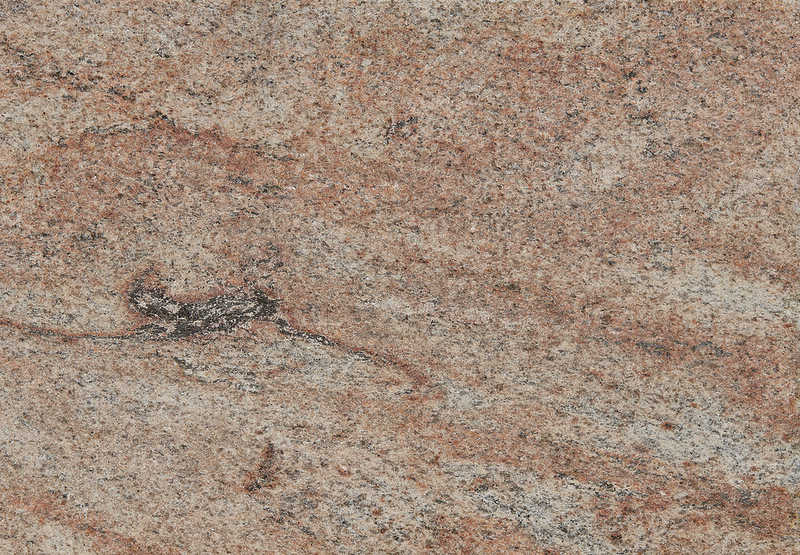 Yagan Square has been a long time coming. Its design team, led by Lyons Architects, included ASPECT Studios and Iredale Pederson Hook. Their design process was not without significant challenges, as it had to respond to almost 2,000 public submissions about the site, collected online. Its construction was also something of a marathon, starting in 2016 and expanding to require over 225 onsite workers and over 80 sub-contractors supplying materials. Finally in March this year, the project that was commissioned by the Metropolitan Redevelopment Authority (MRA), was completed and opened to the public.

The site is located at the edge of Perth’s central business district, within the u-bend of the main freeway to the city, Horseshoe Bridge and opposite Perth Train Station. At this confluence of city-bound transport, there will be a lot foot traffic through the Square but the space is intended to be more than a pedestrian commuter route. 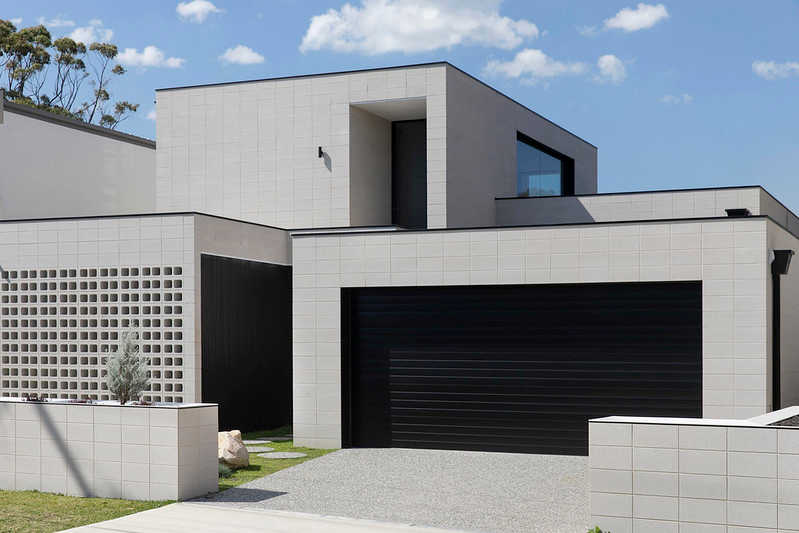